T20 Blast 2022: SUR vs SUS Match Prediction – Who will win the match between Surrey and Sussex? 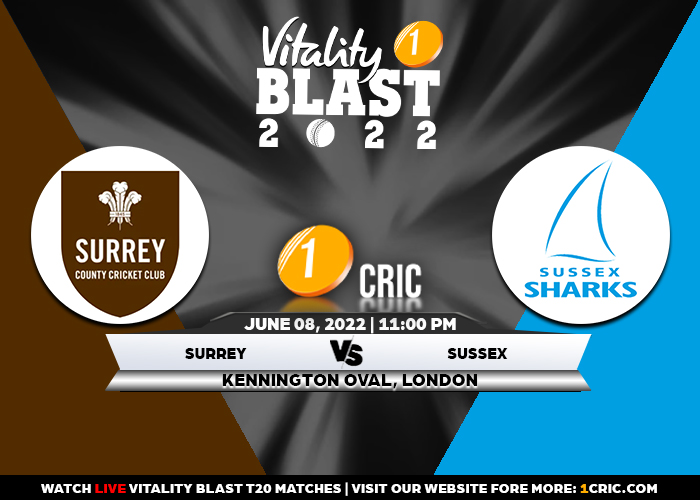 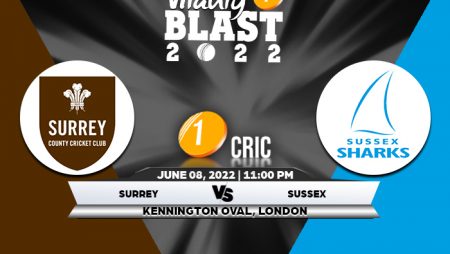 T20 Blast 2022: SUR vs SUS Match Prediction – Who will win the match between Surrey and Sussex?

On June8, Surrey will host Sussex in their next T20 Blast 2022 match at The Oval (Wednesday). Surrey leads the South Group points table with four wins in five games. They are one of the competition’s only two undefeated teams, having won four straight games before their last game was canceled due to rain. Surrey, led by Chris Jordan, is the team to beat this season.

Meanwhile, Sussex had a three-game winning streak before falling to Hampshire in their previous match. Sussex is currently in fourth place, but they will want to win this match against the table-toppers because Gloucestershire and Essex are hot on their tails. To defeat this formidable Surrey side, Ravi Bopara’s men will need to bring their A-game.

The Kennington Oval has a good batting surface with good bounce and carry for the bowlers. The bowlers may have some fun hitting the hard lengths, but the batters are likely to be on top for the majority of the game. The team that wins the toss would prefer to bat first and post a large total because the pitch tends to favor slower bowlers in the second innings. Surrey amassed 228/4 in their first innings against Hampshire at the Oval, the second-highest total by a team this season.

Tim Seifert was drafted into the starting lineup after the in-form Josh Phillipe was forced to withdraw due to commitments with the Australian A side. Despite the fact that Sussex had suffered their third defeat of the season the previous game, it was Seifert’s sensational century that grabbed the attention. The Kiwi batted unbeaten for 100 runs off 56 deliveries, hitting nine boundaries and five towering sixes. The wicketkeeper-batter is going to give the Surrey bowlers fits.

This season, Surrey’s player of the year has been Sam Curran. The all-rounder has been lauded for his prolific season with the bat, but he has also been impressive with the ball. The Englishman has taken 10 wickets in five games, averaging less than eight runs per over. Curran’s exuberance on the field has stood out in a Surrey team full of world-class all-rounders.

Also Read: T20 Blast 2022: DUR vs WAR Match Prediction – Who will win the match between Durham and Warwickshire?