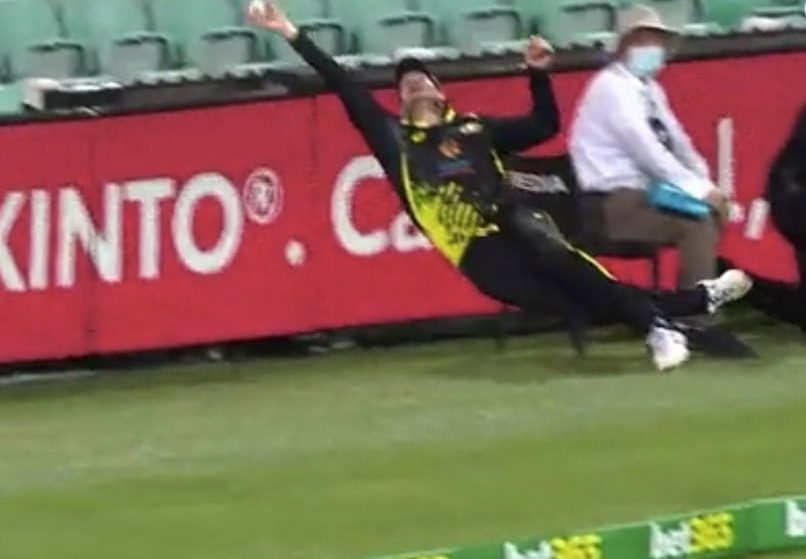 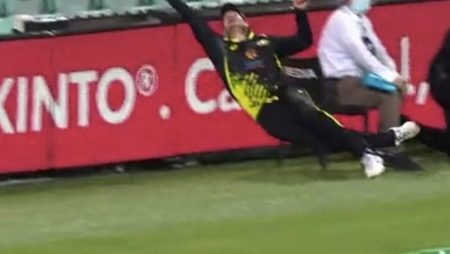 AUS vs SL: During the second T20I between Australia and Sri Lanka in Sydney on Sunday, Australia’s Steve Smith made an incredible acrobatic attempt to prevent a six.

During the second T20I between Australia and Sri Lanka in Sydney on Sunday, Steve Smith made an incredible acrobatic attempt to prevent a six. In a thrilling match, Australia went on to win by super over. Smith only scored 14 runs during Australia’s innings, but he drew attention from fans by putting his body on the line in an attempt to save the six. Smith’s attempt, however, failed because replays showed his foot touching the rope before catching the ball and returning it to the field.

To make matters worse, Smith sustained a concussion as a result of the effort as he landed on his head. As a result, he will miss the remainder of the five-match T20I series.

Here is the video of Steve Smith’s Incredible Acrobatic effort:

The incident occurred during the fourth delivery of Sri Lanka’s 20th over.

Sri Lanka scored 164/8 in their chase after Australia had posted 164/6, sending the match into a super over.

Sri Lanka needed 19 runs to win in the final over. They were able to take 18 runs off it because Stoinis was unable to stop the flow of runs.

Sri Lanka could only muster five runs for the loss of one wicket in the super over.
Australia responded by chasing the target in just three deliveries.

With the win, Australia has a 2-0 lead in the five-match Twenty20 International series.