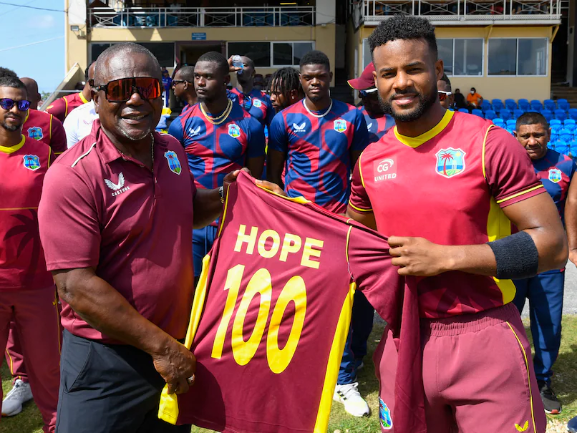 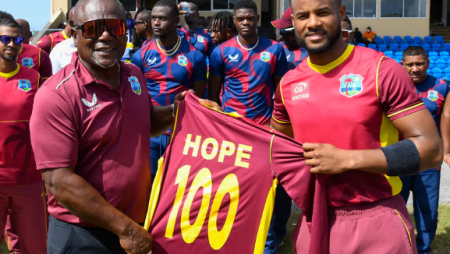 Shai Hope becomes the tenth player in 100th ODI history to score a century. Hope scored 115 runs off 135 balls before being dismissed by Shardul Thakur after being caught at long-off by Axar Patel.

Shai Hope of the West Indies became the tenth batter to score a century in his 100th ODI on Sunday. The stylish West Indies opener accomplished this feat during the second One-Day International against India at Queens’ Park Oval in Port of Spain. He is also the fourth batter from the West Indies to do so. The batter reached his century on the fourth delivery of the 45th over, bowled by spinner Yuzvendra Chahal.

Hope was fantastic with the bat. He scored 115 runs off 135 balls before being dismissed by Shardul Thakur after being caught at long-off by Axar Patel.

Kumar Sangakkara, Chris Gayle, Marcus Trescothick, Ramnaresh Sarwan, David Warner, and Shikhar Dhawan are among the players who have reached the century mark in their 100th ODI.

In the match, the West Indies scored 311/6 in 50 overs after electing to bat first. Windies got off to a fast start thanks to a 65-run stand between Shai Hope and Kyle Mayers (39). Hope and Shamarh Brooks then combined for a 62-run outing (35).

After Brandon King was quickly knocked out, Hope and Captain Nicholas Pooran put up a 117-run stand (74). Shardul Thakur, the Indian pacer, limited the run flow in the final 10 overs and took three wickets, but the Windies had amassed a massive total. With 3/54, Thakur finished as India’s best bowler. India reached the target in 49.4 overs, with two wickets remaining.