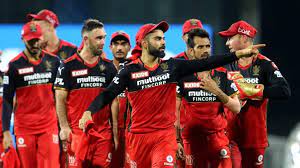 Royal Challengers Bangalore team reviews their Royal win in the Indian Premier League. Bangalore has completed the double-over. Also, in the Rajasthan Royals in the 2021 season of the Indian Premier League. The three-time finalists recorded a comfortable win in the points table. After successive losses to KKR and CSK. Also, the franchise has bounced back with successive wins. It is in pole position among their points table neighbors to make it. Virat Kohli declares the value of momentum and how they cannot afford to let go.

“We have created momentum at the right time and we just need to build it upwards. Regardless of what happens, we see the value of wickets and are we gonna get wickets is not by banking on the opposition’s mistakes but by making sure that you bowl a good ball. You create enough pressure for that wicket to come eventually,” Virat Kohli said.

Mike Hesson praises the performances of the players. He acknowledged the efforts of George Carton to get the vital breakthrough. Also, the work done by the spin twins Chahal and Ahmed in the middle overs.

Royal Challengers Bangalore team now have 14 points in 11 matches. They are on course to make it to the playoffs for the second season. Yuzvendra Chahal was awarded the player of the match for his fine display. Also, figures of 2-18 and claimed the wickets of Mahipal Lomror and Liam Livingstone.

“It felt like they will score 170-180 with the start they got but we bowled well in the middle overs, especially Shahbaz, he got 2 wickets in one over. Definitely, an amazing feeling to win the player of the match, this is my fourth one and it is in the UAE only,” Yuzvendra Chahal said.

Read more: Aakash Chopra on KKR dropping Prasidh Krishna- “No one says anything to the one who got him to bowl that over” in IPL 2021