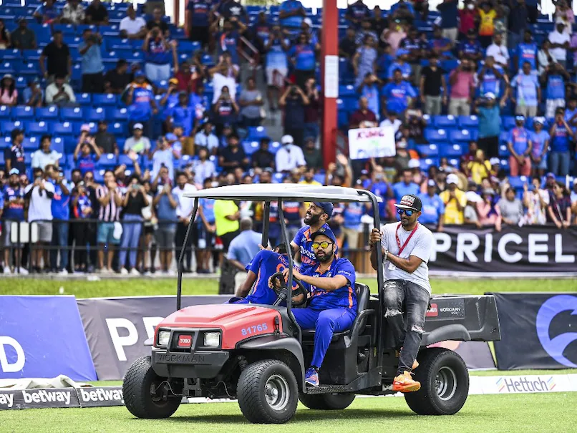 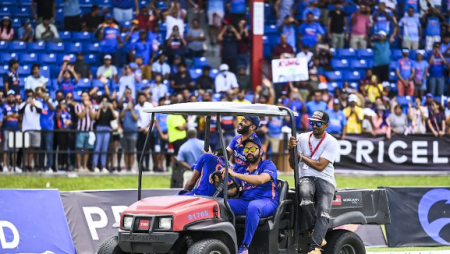 Rohit Sharma Rides a Golf Cart After Winning the T20I Series Against West Indies. In a viral video, Rohit Sharma driving a golf cart on the grounds of the Lauderhill Cricket Ground in Florida, with his teammates along for the ride.

After winning the fifth and final T20I of the five-match series against West Indies by an 88-run margin on Sunday. Team India finish the series with a 4-1 margin in T20Is, having previously won the ODI series 3-0. The hosts were completely dominate by the Rohit Sharma-led side’s outstanding all-round performance. In the absence of senior pacer Jasprit Bumrah, Team India also discovered a new hero in Arshdeep Singh, who took seven wickets and was named Player of the Series. In addition, The T20I series against the West Indies provided fans with many memorable moments. One of which when skipper Rohit Sharma seen riding a golf cart in the stadium after winning the series.

In a viral video, Rohit Sharma seen driving a golf cart on the grounds of the Lauderhill Cricket Ground in Florida, with his teammates along for the ride. Among those seen enjoying the unique ride with the skipper were Dinesh Karthik, Axar Patel, Rishabh Pant, and Ravi Bishnoi.

However, The video quickly went viral on social media, and everyone praised Team India for their outstanding performance in the series against the West Indies.
Earlier, following the fourth T20I victory, Rohit seen thanking the fans in Florida. BCCI distributed the video.

Earlier on Monday, the Indian squad for the upcoming Asia Cup also announce, with Rohit appointed as captain and KL Rahul as vice-captain. Former captain Virat Kohli has returned to the squad after a brief absence. Due to an injury, premier paceman Jasprit Bumrah has been ruled out of the tournament.