Nicholas Pooran is denied a certain six-pointer by Shreyas Iyer’s acrobatic save. 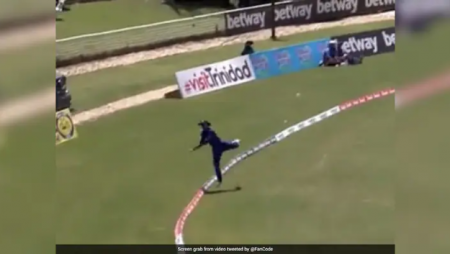 Nicholas Pooran is denied a certain six-pointer by Shreyas Iyer’s acrobatic save. In the fifth over of the innings, Shreyas Iyer was at the peak of his acrobatic abilities when he stopped the ball from going for a six.

Team India defeated West Indies in the opening Twenty20 international. With a convincing 68-run victory thanks to an all-around effort from the Rohit Sharma-led team. The bowlers worked as a team to limit West Indies to 122/8 after Rohit Sharma and Dinesh Karthik contributed to India scoring 190 runs on the board. In the sixth over of the innings. Shreyas Iyer made an outstanding defensive play that prevented Nicholas Pooran from hitting Ravichandran Ashwin for a six.

Pooran made the decision to attack Ashwin on the opening ball of the fifth over. He came down the track and lofted the ball into the air. Iyer, who was standing deep in the middle of the wicket, sprung acrobatically to his right in an attempt to collect the ball, but his right leg was millimeters from the fence.

Iyer made the decision to re-throw the ball into play as a result. West Indies were limited to just two runs.

Rohit Sharma, the captain of India, was in excellent form during the first T20I against the West Indies. He went on to score 64 runs off just 44 balls, hitting 7 fours and 2 sixes in the process. During this innings, Rohit passed Martin Guptill of New Zealand to take the top spot among men’s T20I run scorers.

In the first Twenty20 International between India and West Indies, the former batted first and scored 190/6 in 20 overs. Dinesh Karthik scored an undefeated 41 runs off just 19 balls with the help of 4 fours and 2 sixes. While Rohit score a 64-run innings.

Arshdeep Singh, Ravichandran Ashwin, and Ravi Bishnoi all returned with the ball in hand and each took two wickets as India defeated West Indies by 68 runs in 20 overs.