MS Dhoni “Lesson” That Changed Hardik Pandya As A Cricketer 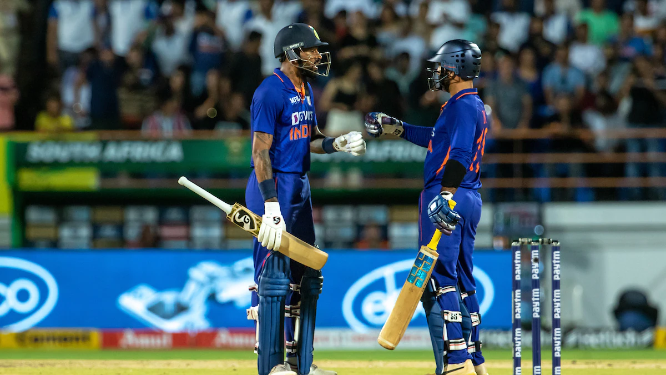 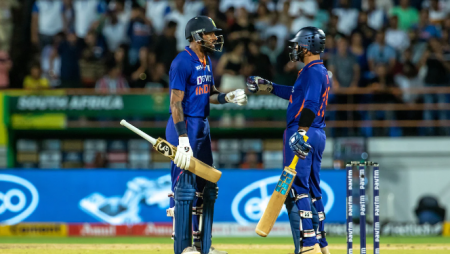 MS Dhoni'”Lesson” That Changed Hardik Pandya As A Cricketer. Hardik Pandya was instrumental in India’s 82-run victory over South Africa in the fourth T20I, bringing the five-match series to a 2-2 tie.

India’s 82-run victory over South Africa in the fourth T20I in Rajkot on Friday may have given the impression that it was a walk in the park for the Rishabh Pant-led hosts, but this not the case. India struggled with the bat at first. Dinesh Karthik (55, 27b) and Hardik Pandya (46, 31b) held their own to help the team reach 169/6 in 20 overs. The latter arrived at the crease in the seventh over with India trailing by three runs, and then batted responsibly before going bonkers in the final five overs. Pandya’s performance was a continuation of his excellent form since winning the Indian Premier League (IPL) 2022 with Gujarat Titans.

Pandya revealed a lesson from MS Dhoni that transformed him as a cricketer.

“For me, nothing changes because I play the situation, and I play the symbol on my chest. ” The only thing I want to improve with time is my smoothness and how frequently I can do what I did for Gujarat Titans and for India,” Pandya said in a video posted on the BCCI website to Dinesh Karthik.

“Many years ago, Mahi bhai taught me one thing. I asked him a simple question like, “How do you get away from the pressure and everything?” And he gave me some straightforward advice. ‘Stop thinking about your score and start thinking about what your team needs,’ it said. That lesson has stayed with me and helped shape me into the player I am today. In any situation, I assess and play accordingly.”

In the match, Karthik played a memorable knock before Avesh Khan gave his father the “perfect birthday present” with a fiery spell as India steamrolled South Africa to level the five-match series 2-2 on Friday. Karthik’s maiden fifty came nearly 16 years after his T20 debut, and he and vice-captain Pandya led India to a fighting total.

South African batters faltered for the second game in a row, falling to 87 for nine in 16.5 overs, with skipper Temba Bavuma retiring hurt. Avesh (4/18) led India’s brilliant display with the ball, recording career-high figures. It was the lowest total by an away team in T20 Internationals in India.

Also Read: Hardik Pandya to Dinesh Karthik: “Given A Lot Of Inspiration To Many Guys”