Mohammed Siraj and Sanju Samson emerge as heroes for India. 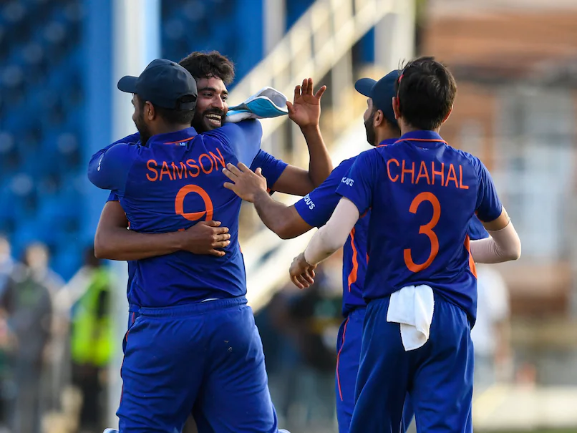 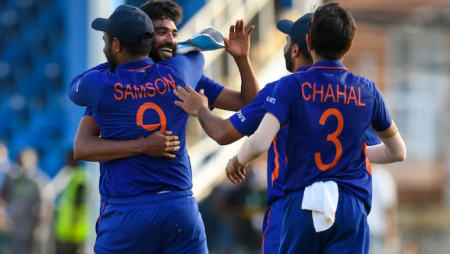 India won the first One-Day International (ODI) against the West Indies in Port of Spain on Friday. After India set a 309-run target, the hosts needed 15 off Mohammed Siraj’s final over. The Indian fast bowler conceded ten runs in the first five balls. On the final ball, the equation was simple: five to win or four to send the match to the Super Over. Romario Shepherd was on strike as Siraj attempted a yorker on the final ball. It went past the batter and towards the leg stump, but Sanju Samson stretched himself to stop a boundary and give India the victory.

Watch: A nervy end to the first ODI

Following India’s thrilling three-run victory over the West Indies in the first ODI, Indian spinner Yuzvendra Chahal stated that the team was confident Mohammed Siraj would be able to defend 15 runs in the final over. West Indies were defeated by India in the first ODI of a three-match series here at Queen’s Park Oval in Trinidad on Friday, despite brilliant half-centuries from Kyle Mayers and Brandon King.

“We were confident that Siraj could defend 15 runs in the final over due to the way he bowled his yorkers. He had only missed one or two yorkers in his previous two overs. There was both confidence and pressure due to the way the West Indies batted. The save by Sanju Samson on the wide ball boosted our confidence “Chahal stated this during a post-match press conference.

Chahal stated that his bowling strategy in the match will be based on his strengths.

“I knew the ball was getting old, and turning it can help you beat the batter. Because the leg side boundary was so small, I had to change my line and bowl wider. I wanted them to smack me over the head, “He continued.