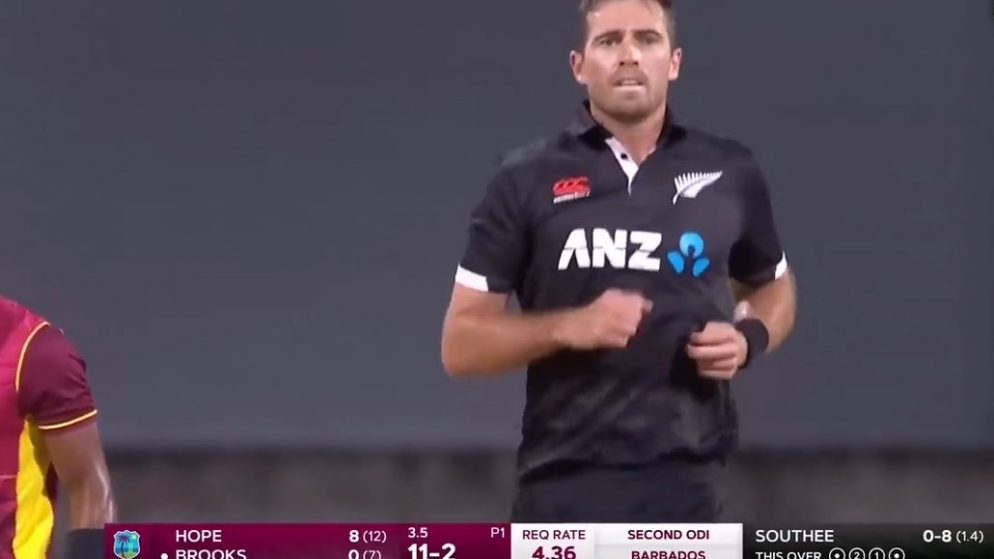 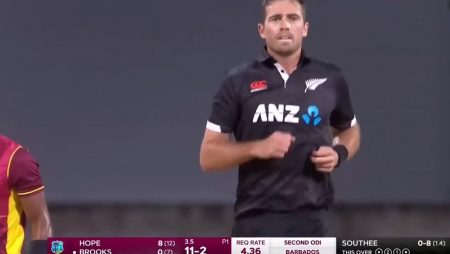 New Zealand defeated West Indies by 50 runs in the second ODI between the two teams on Friday at Kensington Oval in Barbados. Given that the visitors were down 0-1 in the three-match series, it was a much-needed victory. Finn Allen their star on the day, scoring 96 runs to help the team reach 212 before being bundled out. Meanwhile, Michael Bracewell stole the show, not for his batting or bowling. But for a spectacular catch he made during the game.

When West Indies batter Brandon King hit a Tim Southee delivery to his right, Bracewell was fielding at mid-on. The Kiwi all-rounder cover a lot of ground before making a spectacular dive to his right and catching a spectacular catch. King’s wicket the third to fall for the West Indies, and his departure left them reeling at 21 for 3 in 7.4 overs.

In terms of the game, Southee and Trent Boult combine to demolish the West Indies top-order batting as New Zealand leveled the series.

Following Allen’s crucial knock for New Zealand Southee and Boult took four and three wickets, respectively. To keep the West Indies at bay since the latter’s innings began. Meanwhile, Mitchell Santner and Glenn Phillips each took a wicket to aid the visitors’ cause.

The teams will meet again in the final ODI on August 21 at the same venue. It’s worth noting that New Zealand won the three-match T20I series between the two teams 2-1 prior to the ODIs.

Also Visit: Pakistan must capitalize on the absence of India’s premier pacers Bumrah and Shami from the Asia Cup: Sarfraz Nawaz