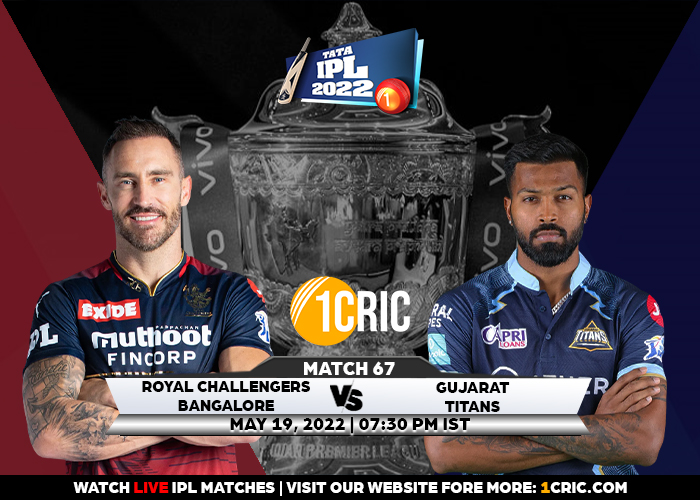 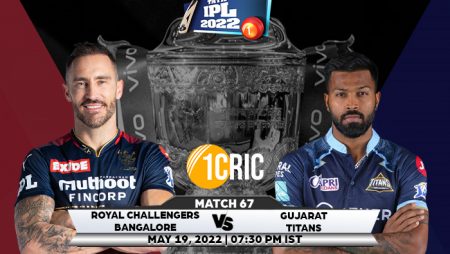 Match 67: IPL 2022, RCB vs GT Match Prediction – Who will win today’s IPL match between RCB and GT? Gujarat Titans have already qualified for the IPL 2022 playoffs.

The Royal Challengers Bangalore will face the Gujarat Titans in their next match at the Wankhede Stadium. The Faf du Plessis-led side was thrashed in their previous game against the Punjab Kings. Which has had a significant impact on their net run rate. With seven wins in 13 games, a victory may not be enough for the RCB team. Their fate is still out of their hands, with other results influencing scenarios.

Gujarat Titans, on the other hand, have been the team to beat so far in the tournament. Having qualified for the playoffs with 10 wins in 13 games. However, with the playoffs approaching, the Hardik Pandya-led side will be looking to maintain their winning streak. After his scintillating knock in the previous game, Wriddhiman Saha’s form has been a huge boost to the side.

Also Visit: “I Think It Was A Good Call.” says Ishan Kishan of the Mumbai Indians’ decision to release Tim David

While most games this year at the Wankhede Stadium have been low-scoring affairs, the game between MI and SRH at the venue demonstrated that there is still plenty of room for the batters. It will be critical to capitalize on the powerplay, and the captain who wins the toss will not mind batting first.

Shubman Gill has been crucial at the top of the order for the Gujarat Titans all season and is currently sixth in the race for the orange cap with 402 runs in 13 games. He has made some tough runs for the team and will be hoping to enter the playoffs with a good knock that will boost his confidence.