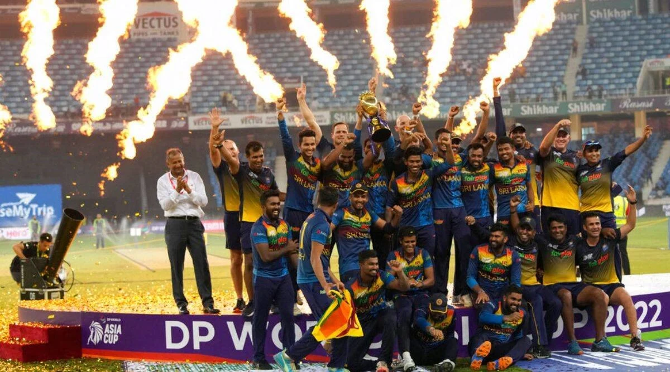 Former Sri Lanka captain Mahela Jayawardene heaped praise on the young team that made the country proud by defeating Pakistan in the Asia Cup 2022 final. Sri Lanka did not look back after a humiliating loss to Afghanistan in the group stage, winning all of their remaining games to win the tournament.

The Sri Lankan top order collapsed in the final. The team was put on the back foot right away with five early wickets. However, it was the batsmanship of Bhanuka Rajapaksa and Wanindu Hasaranga that changed the game’s outcome. While Pramod Madushan continued his impressive start to his Sri Lankan career with a four-wicket haul.

Asia Cup victory: Hasaranga was named Player of the Tournament for his all-round performance in the tournament

He took three wickets in a single over in the final. The Island nation managed to turn the tides in their favor, and their incredible collective performance in the tournament deserved the trophy.

Jayawardene has now praised the Sri Lankan team and stated that it was a good toss to lose in the end, as Shanaka had won the majority of the tosses in the tournament until the final.

“Good toss to lose boys!! Showed character and passion to play for the country and so proud of each and every one enjoy the victory as the entire country will..” Jayawardene tweeted after the game.

Also Read: Wasim Jaffer selects the players who impressed him the most during the Asia Cup 2022.