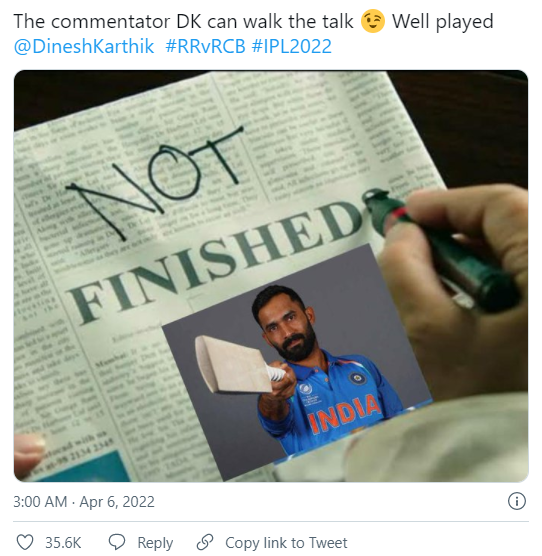 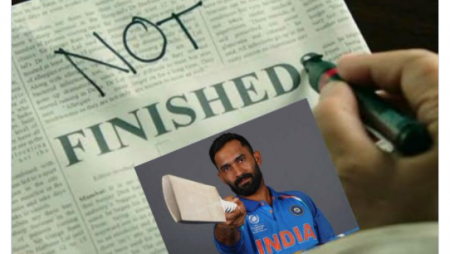 Dinesh Karthik has been in outstanding form for Royal Challengers Bangalore since the start of their IPL2022 campaign (RCB). On Tuesday, he played a match-winning knock of 44* off just 23 deliveries to help RCB chase down their target. 170 runs in their third match of the season against RR at the Wankhede Stadium in Mumbai. He came in to bat with the score at 87/5 after 12.3 overs, but put on a 67-run stand with Shahbaz Ahmed (45 off 26) to propel his team to victory.

Wasim Jaffer, a former India batter, took to Twitter to praise Karthik, who has only recently begun his commentary career.

“The commentator DK can walk the walk,” he wrote in his tweet, followed by “Well played.”

Wasim Jaffer’s Tweet was accompanied by a picture, indicating that he is “not finished.”

Concerns have been raised about Karthik’s performance in the IPL over the last few seasons. However, he has returned with a vengeance this year, putting any doubts about his abilities to rest.

In RCB’s first match, against Punjab Kings, he blitzed 32 off 14 deliveries to help the team post a total of 205/2, despite the fact that the Mayank Agarwal-led side was able to mount a massive chase.

Then, against his old team, the Kolkata Knight Riders, he made an important cameo, hitting 14 off seven deliveries to help RCB complete a difficult chase following a top-order collapse.

So far this season, he has hit 90 runs off 44 deliveries and has yet to be dismissed, primarily in the death overs.

Also Read: Can’t Point Why We Lost the Game: Sanju Samson After Loss to RCB