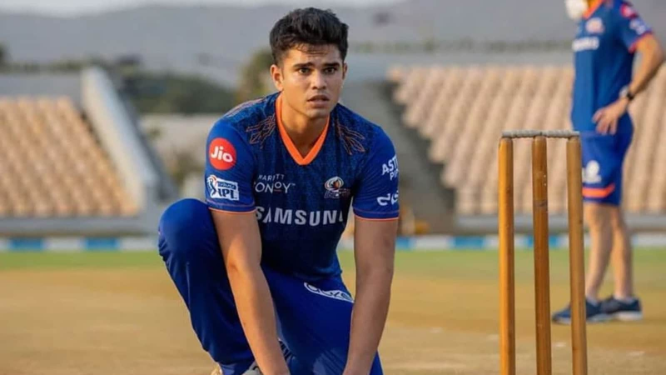 IPL 2022: MI Predicted XI vs. DC: Will Arjun Tendulkar Make His IPL Debut? Arjun Tendulkar could finally get a game when MI plays DC in their final league game of the season at Mumbai’s Wankhede Stadium.

On Saturday, the Mumbai Indians (MI) will face the Delhi Capitals (DC) in their final league game of the IPL 2022 at Mumbai’s Wankhede Stadium. MI would like to win and derail DC’s chances of making the playoffs, where they are tied for first place in the IPL 2022 points table with Royal Challengers Bangalore (RCB). Looking at MI’s final XI, young all-rounder Arjun Tendulkar could finally get a game and make his long-awaited IPL debut in the season’s final game.

Also Visit: “At First, It Was A Little Difficult For Him,” says MI Coach Mahela Jayawardena of Tim David.

Here’s how MI Predicted XI against DC on Saturday:

Looking back on the season, Ishan would be disappointed not to have taken advantage of certain good starts. This season, he is averaging 30.83 with a strike rate of 118.21.

Rohit has recently shown signs of regaining his form. However, consistency has been a problem for the batter and, as a result, the team this season.

Tilak has clearly been one of the most important positives for the MI franchise this season. After 13 games, he is averaging 37.60 and has a strike rate of 131.47.

Ramandeep’s all-round abilities were on full display as he took three wickets to go with his 14-run knock off just six balls.

Despite an average outing against SRH in which he was run-out for two runs, Stubbs could be given another chance in the final line-up of the season.

Tim’s explosive batting abilities have won him a legion of new fans. His crucial 46-run knock against SRH in the previous match nearly got the team over the line.

Sanjay was expensive in the previous match, going for 23 runs in two overs against SRH, which he would like to improve on against DC.

Sams’ wicket-taking abilities have been crucial in giving MI a good start with the ball.

This season, Bumrah has been relatively quiet. The bowler has 12 wickets in 13 games at a below-par average of nearly 30.

Meredith took the crucial wicket of Nicholas Pooran in the previous game, but he went for 44 runs in his four overs and would like to improve on his figures from that game.

Mayank Markande could be replaced by Arjun Tendulkar, who could make his IPL debut.

Also Read: “We Laughed About It,” says Virat Kohli of his hilarious interaction with Jos Buttler.