India vs. West Indies: The Start of the Third T20I Has Been Postponed By 1.5 Hours 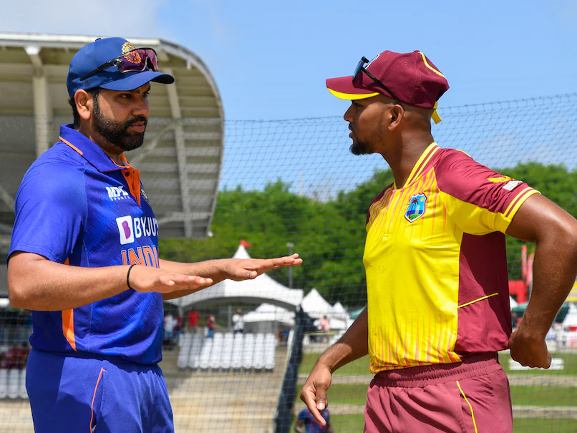 India vs. West Indies: The Start of the Third T20I Has Been Postponed By 1.5 Hours.

Cricket West Indies (CWI) has confirm that the third T20I between India and West Indies has been postpone by 1.5 hours to allow both teams adequate rest. The match was originally schedule to begin at 8 p.m. IST, but it will now begin at 9:30 p.m. IST. It is worth noting that the second T20I between these two teams began three hours late on Monday due to logistical issues.

“Cricket West Indies (CWI) confirmed a revise start time of 12pm (11am Jamaica/9:30pm India) for the third Goldmedal T20I Cup match between West Indies and India, to be play at Warner Park in St Kitts on Tuesday 2nd August,” CWI said in an official statement.

The two teams are level 1-1 in the five-match series after the West Indies won the second T20I by five wickets. Obed McCoy, a left-arm pacer, had the best T20I bowling figures by a West Indian bowler, taking six wickets for 17 runs.

The first match won by India by 68 runs last Friday at the Brian Lara Cricket Academy in Trinidad.