IND versus SA: Temba Bavuma rested for the second ODI 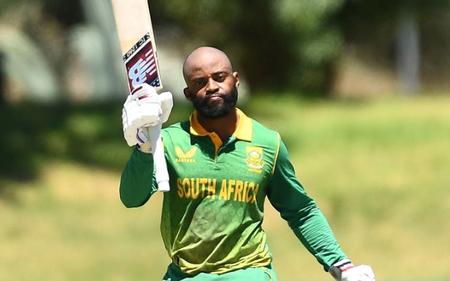 IND versus SA: Temba Bavuma rested for the second ODI. Due to Temba Bavuma’s rest, Keshav Maharaj is leading South Africa against India in the second One-Day International.

South Africa will be hoping to win the three-match ODI series against India. In the second One Day International on Sunday, October 9. At the JSCA International Stadium Complex in Ranchi after their tenacious nine-run victory in the first game.

The second ODI’s toss was call by spinner. Keshav Maharaj and Indian captain Shikhar Dhawan Rather than Temba Bavuma, who normally leads his team. But Maharaj explain why Bavuma was unable to participate in this match, forcing him to serve as the substitute captain.

Read also: Selectors have made their decision. Rohit Sharma and Shikhar Dhawan named as openers for the 2023 ODI World Cup: Saba Karim

Temba Bavuma won’t play in the second ODI between India and South Africa.

The team management has to make some force changes because Temba Bavuma and Tabraiz Shamsi were not keeping well. According to Keshav Maharaj, who spoke at the toss. As their replacements, Reeza Hendricks and Bjorn Fortuin is name to the starting XI.

Another thing that stand out about this situation is that Keshav made the decision to bat first right after winning the toss, saying that South Africa’s goal will be to score runs and then restrict India in the second innings.

It should be noted that Bavuma’s batting efforts in the current India series have been underwhelming. Despite winning the third game, the Proteas were defeat 1-2 as a result of his two ducks in the T20Is.

In Lucknow’s opening ODI, he was dismiss for only eight runs. As he prepares to take the lead in leading South Africa, the Proteas captain will be count on to perform well in the T20 World Cup. After the previous World T20 competition, Bavuma will lead the team for a second time.

Heinrich Klaasen, a rising star in the field of batting, also discussed his belief in self-motivation strategies, such as keeping himself mentally prepared and having faith in his skill with the bat.

“It’s just about staying mentally ready and just believing that I’m still in good form and I have been having a fantastic year so far, so I just need to ride on that wave and keep mentally fresh and make sure the body is full of energy so that I can keep up with the intensity. Think that is the hardes part of coming in from the bench is to keep up with the intensity of the format.”

Klassen while speaking to the broadcasters.

“I try to get into the crease with game-plan ready and I just need to try what we spoke about and what we prepped on over the last couple of years, and if it doesn’t work we can live with it. Bowling plans at the backend wasn’t too great in the last game, we had a chat about it and we will sort that out today and hopefully we can make some good decisions and stay nice and calm.”