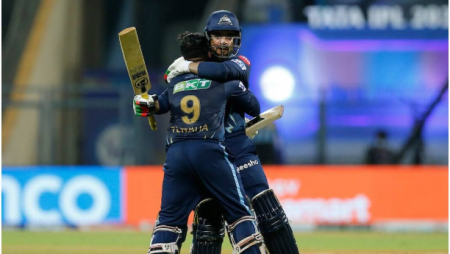 In the final over, Rashid Khan hits three sixes off four balls to help GT defeat SRH. Here’s how Rashid Khan and Rahul Tewatia assisted Gujarat Titans in scoring 22 runs in the final over to defeat SunRisers Hyderabad in an IPL 2022 match.

Rashid Khan saved his best for the final over of the day on Wednesday. Chasing 196 against SunRisers Hyderabad (SRH). The odds were heavily stacked against Gujarat Titans, who needed 22 off the final six balls at Mumbai’s Wankhede Stadium. Rahul Tewatia and Khan batted, with left-arm pacer Marco Jansen bowling the final over. However, the duo was unfazed as they hit the target with the last ball of the match to give GT a five-wicket victory. GT has consolidated their No. 1 position in the points table with this victory, giving them 14 points.

But, before all of that could happen, the GT dugout experienced some nervous moments as Tewatia and Rashid Khan faced a difficult task. Tewatia hit Jansen for a six over deep midwicket on the first ball, then took a single. With the main batter on strike, the GT camp was nervous. On the third ball, Khan hit a six straight down the ground, but the fourth ball was a dot.

With GT needing nine off two balls, Rashid Khan first sliced one for the maximum and then hit another six off the final ball to help his team win.

“Feels good to go there and have that self-belief and keep my shape stronger and hit it,” Khan said after the match. “Happy to deliver against them (SRH), just trying to play my game and have that belief on my batting which I’ve been working on for the last two years.”

“When there were only 22 seconds left. I just told Tewatia that we gave 25 in the last over with one of our best bowlers bowling. That we needed to have that belief and not panic because anything is possible. That was the plan (with Tewatia): just stay there, keep your shape, and hit it hard.”