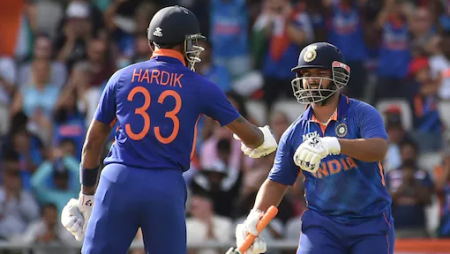 Rishabh Pant and Hardik Pandya shone as India defeated England by five wickets in the third and final One-Day International to win the three-match series 2-1. India was 72/4 at one point, but Hardik Pandya and Rishabh Pant combine at the crease to put on 133 runs for the fifth wicket. Hardik dismiss after scoring 71, but Pant persevered to the end, scoring 125 not out and leading the visitors to victory with 47 balls to spare.

Hardik spoke at length about his partnership with Pant and what he told the left-handed batter during their 133-run stand.

“I was just saying the same thing over and over: it was critical that we not take any risks. We can score runs with the kind of talent Rishabh and I have without taking any risks. It was all about not losing any wickets; there was only one way for England to recover, and that was if we lost wickets in a row. I was doing the same thing over and over again in order to form a partnership and bring the match to a close “Hardik stated.

“I told Rishabh that you should finish the game first and then relax. He got a little stuck when he came in, but he eventually started playing his shots. And everyone knows that once Rishabh begins to play his shots, you just sit back and let him do his thing “He continued.

Pandya earlier taken four wickets as England were bowled out for 259 in 50 overs.

Pant and Pandya will next be seen in action in a five-match T20I series against the West Indies, which begins on July 29.

Also Read: “If I get 20 minutes with him…”: Gavaskar on How He Can Assist Virat Kohli