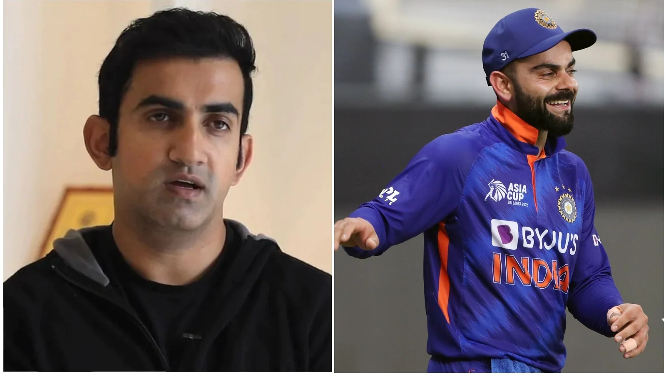 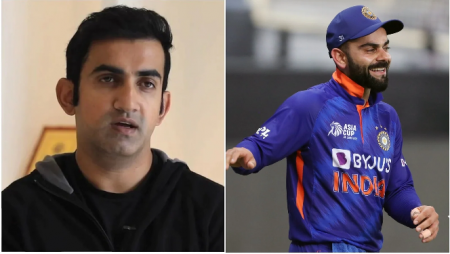 Virat Kohli fans were relieved on Wednesday night when the former Indian cricket team captain scored 59* off 44 balls against Hong Kong in an Asia Cup match. The half-century came after a period in which Kohli struggled for big scores. Virat has now scored 3,402 runs in 101 T20Is at an average of 50.77, the highest for anyone in the format. In the format, he has 31 half-centuries, with the best individual score of 94*. He has a 137.12 strike rate. Gautam Gambhir, a former Indian cricketer, commented on the innings after the game.

“This is most likely not the appropriate opposition to judge Virat Kohli or any batter. However, the runs were crucial. You must go out in the middle and make an effort to score runs, regardless of the opposition “said Gambhir during a Star Sports discussion.

Also Visit: Ricky Ponting on Virat Kohli: “Sounded Like He Found Himself In Quite A Dark Place”

I hope he will be seen in better rhythm in upcoming matches: Gautam Gambhir

“If you want to judge whether he was seen in that rhythm or whether he will come in that rhythm. I hope he will be seen in better rhythm in upcoming matches. Because it wasn’t that kind of quality bowling.” However, it is a 60-run out. Rohit Sharma and KL Rahul also had chances, but while Virat Kohli scored 60 runs, KL Rahul and Rohit Sharma did not. Only by putting in the effort in the middle will you gain confidence. Virat Kohli needed an innings like this because he is returning after a long absence. Because being a player is never easy. The pitch helped the fast bowlers in the first match, the opposition was tough, and it was a better bowling line-up, but in the upcoming matches, whether against Afghanistan or Pakistan, Virat Kohli will look in better rhythm now.”

The 33-year-old is now tied with Rohit Sharma, who has 31 half-centuries in 126 innings and four centuries in 134 matches. Only Babar Azam, David Warner, Martin Guptill, and Paul Stirling have more than 20 T20I fifty-plus scores. Nobody else has more than 30 such scores.

Virat also recently became the first Indian player to play in 100 matches across all three formats, joining Ross Taylor as the second player in history to do so. Virat scored 35 of 34 calls before being knocked out in his 100th T20I against Pakistan.