Dinesh Karthik scores six and four in the last over of the second T20I against Australia. 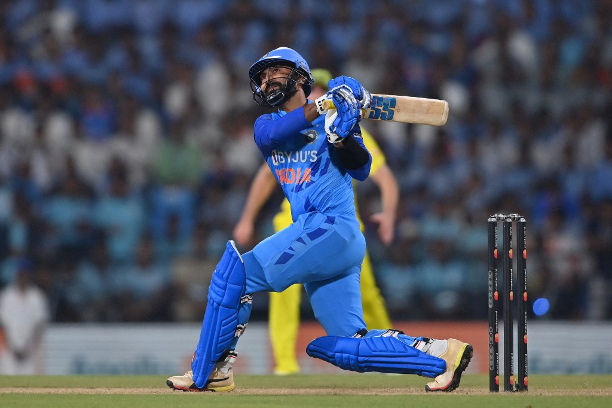 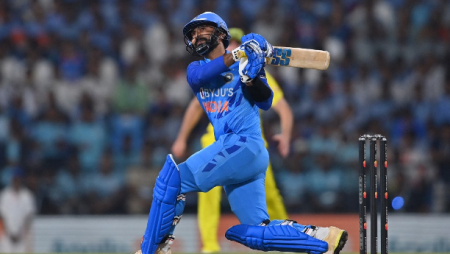 India defeated Australia by six wickets in the second Twenty20 International on Friday in Nagpur. Because to the damp outfield, the game shortened. Because the start was delayed, the match was trimmed to 8-overs-a-side. Australia scored 90 runs for the loss of five wickets, while India scored on the second delivery of the eighth over. While Rohit Sharma anchored the innings with his 46 not out off 20 balls, it was Dinesh Karthik who brought India home with a six and a four in the first two deliveries of the last over.

India needed 9 runs off the last over delivered by Daniel Sams to win. The first ball was bowled by the left-arm bowler on Karthik’s pads, and he hammered it for a six over backward square leg. To prevent any drama at the end of the game, Karthik pulled Sams’ slower short ball for a four towards deep mid-wicket and finished the game for India.

India skipper Rohit, who was stationed at the non-end, striker’s went to Karthik and hugged him shortly after the match-winning four.

Watch the video here: Dinesh Karthik scores six and four in the last over

Earlier, Matthew Wade’s 43 off 20 balls and Aaron Finch’s 31 off 15 balls helped Australia record a competitive total. Axar Patel was outstanding with the ball, bringing up two wickets while allowing only 13 runs in two overs.

In response, Rohit and KL Rahul gave India a great start, adding 39 runs in only 2.4 overs before Rahul was bowled by Adam Zampa. The Australian spinner then removed Virat Kohli and Suryakumar Yadav to maintain his team in the game, but India was finally defeated by the combo of Rohit and Karthik.