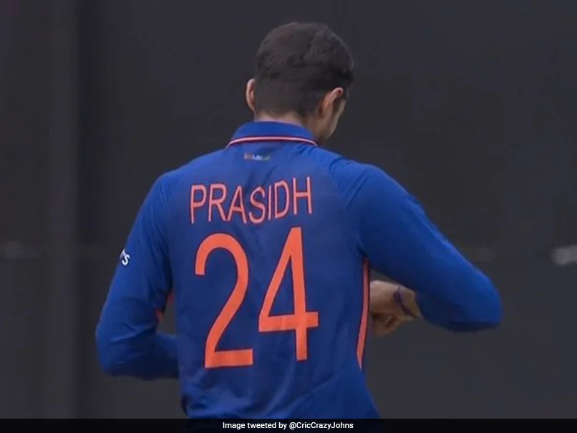 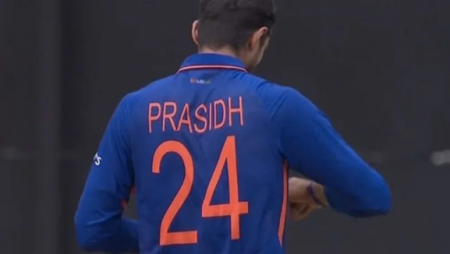 Deepak Hooda was seen wearing Prasidh Krishna’s jersey during the second ODI between India and the West Indies.

The West Indies won the toss and chose to bat in the second One-Day International against India. Kyle Mayers and Shai Hope got off to a good start. Putting on 65 runs for the first wicket in 10 overs, but its Deepak Hooda who provided the first breakthrough, dismissing Mayers on the first ball of the 10th over. Hooda, on the other hand, made headlines when fans noticed him wearing Prasidh Krishna’s jersey.

Many Twitter users noticed Hooda wearing the Prasidh jersey, and here are some of their reactions.

The first ODI was won by India by 3 runs after Mohammed Siraj held his nerve in the final. India won the first ODI by defending 308 runs to take a 1-0 lead in the three-match series. Half-centuries from Shreyas Iyer, Sanju Samson, and Axar Patel helped Team India win the second ODI of the three-match series against the West Indies by two wickets on Sunday at Queens Park Oval in Port of Spain.

Moreover, India now leads the series by a score of 2-0. At 79/3, Iyer (63) and Samson (54) provided stability to their innings with a 99-run stand. Contributions from Deepak Hooda (33) and Axar Patel (64*) proved crucial in propelling the visitors to victory. Despite sending back the top order in the early stages of the match and posting a massive total themselves, West Indies lost control of the match.

India was off to a good start in pursuit of 312. Shubman Gill demonstrated strong intent from the start and pushed some good boundaries. Shikhar Dhawan, his partner, was the more reserved of the two.