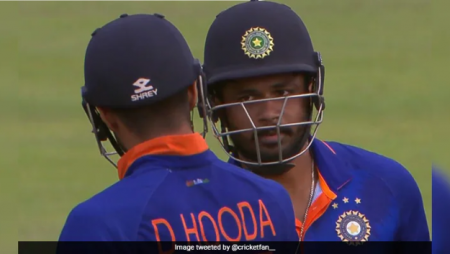 Deepak Hooda scored 104 runs to help India defeat Ireland by four runs in the second match and clinch the two-match T20I series 2-0 on Tuesday. The 176-run partnership between Hooda and Sanju Samson led the visitors to a total of 225 runs. Hooda, who named Player of the Match and Series. Expressed his delight at seeing his childhood friend Sanju doing well at the post-match presentation ceremony.

Deepak Hooda: “Sanju is a childhood friend of mine. We play U-19 together, and I am Happy for him.”

“Ireland is fantastic; I had a great time there. The fans are fantastic here, and I never felt like I was playing outside of India. Yes, the wicket is unique. Thank you to everyone who has shown their support “Hooda stated.

The right-hander smashed 104 off 57 deliveries to become only the fourth Indian to score a century in a T20 International. His knock featured nine fours and six over-the-fence hits.

“I’m coming off a strong IPL performance and was hoping to replicate it here. I like to play aggressively. I have the time to bat up the order, and I try to play according to the situation “He continued.

In terms of the match, top knocks from captain Andrew Balbirnie (60), Paul Stirling (40), and Harry Tector (39) were in vain as India snatched the match from Ireland in the final over, winning by four runs.

India has now won the series 2-0. Ireland, on the other hand, will take a lot of positives from the game because they stayed in it until the very last ball and gave India a scare with their batting.