Daryl Mitchell’s fractured right hand has forced him out of the New Zealand T20I Tri-Series. 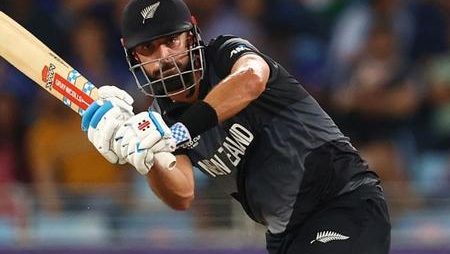 Daryl Mitchell’s fractured right hand has forced him out of the New Zealand T20I Tri-Series. Mitchell’s replacement has yet to be identify.

The T20 Tri-Series, which begin on October 7. And is being play between hosts New Zealand, Pakistan, and Bangladesh at Christchurch. Has been postpone after New Zealand batsman Daryl Mitchell break his hand during a practice session. The Blackcaps have suffers a significant setback as the T20 World Cup approaches. And in just a few days as a result of Mitchell’s injury.

The all-rounder struck on his right hand while batting in the nets. And an X-ray later showed that his fifth metacarpal had fractured (pinkie finger). According to BLACKCAPS physio for the Tri-Series, Theo Kapakoulakis. Mitchell’s hand has been cast and will need to be kept that way for at least two weeks.

His versatility and all-around skills in the Tri-Series will be sorely missed. David Stead

Head coach Gary Stead said that more time was need to decide. If Mitchell give his injury, will be eligible for the ICC T20 World Cup. Before the team was set to depart for Australia on October 15. Stead stated that Mitchell is an essential part of New Zealand’s white-ball setup. And that the team will miss his presence and his contributions.

“It’s a real shame for Daryl to suffer this injury on the eve of an exciting period of cricket for the side. Daryl’s become a really important player to our T20 unit and we’re certainly going to miss his all-round skills and versatility in the Tri-Series. With our first game of the World Cup in just over two weeks we need to take some to consider Daryl’s recovery timeline and his potential involvement in the tournament.”

Although Mitchell’s successor in the New Zealand Tri-series squad has not yet been announce, NZC is anticipate to do so shortly. Mitchell Santner, who is on paternity leave and will join the squad later this week, will be replace by Blair Tickner, who NZC announce would join the team on Thursday, October 6.

On Saturday, October 8, New Zealand’s Tri-series campaign gets underway when they play Pakistan, who are head by Babar Azam, at Hagley Oval in the second game of the series.