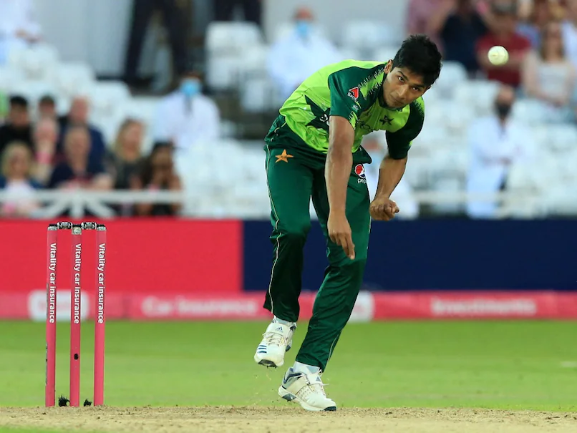 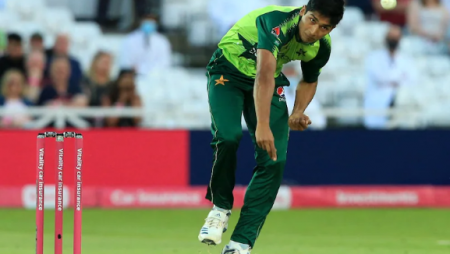 County game: Mohammad Hasnain’s toe-crushing yorker rattles the batter. Game Mohammad Hasnain bowled a yorker at a good pace to Anuj Dal, with the ball angling inside. When the ball arrived at the batter, it swung outside sharply, rattling his stumps.

Mohammad Hasnain bowled a fantastic yorker to dismiss Anuj Dal in Derbyshire’s Division 2 County match against Worcestershire on Monday. Dal was batting on 55 runs off 111 balls when Hasnain finished off Derbyshire’s first innings with a peach of a delivery. For 130 runs, the team was bundle out. Hasnain bowled the fuller-length delivery with the ball angling inside at a good pace. When the ball arrived at Dal, it swung outside sharply and rattled his stumps.

Also Visit: Arshdeep Singh is a fantastic option for India in the T20 World Cup and the Asia Cup: Danmark Kaneria

In the first innings, Derbyshire’s highest scorer was Anuj Dal, who was followed by their captain, Leus du Plooy, who scored 38 runs. Dillon Pennington was the standout bowler for Worcestershire, finishing with 4 for 36. With figures of 3 for 18, Ed Barnard was the second best bowler. Meanwhile, Hasnain took two wickets and allowed 35 runs. Derbyshire’s final wicket was taken by Joe Leach.

Worcestershire, on the other hand, failed to replicate their batting performance and were bowled out for 185 runs, despite Kashif Ali’s 52-run knock. Meanwhile, Jack Haynes fell two runs short of his half-century. Ben Aitchison took four wickets for Derbyshire (4 for 40), while Samuel Conners also took three wickets for 63 runs. George Scrimshaw took two wickets, and Dal took one.

Derbyshire are fourth in the table after ten games, while Worcestershire are one spot below them after nine games.