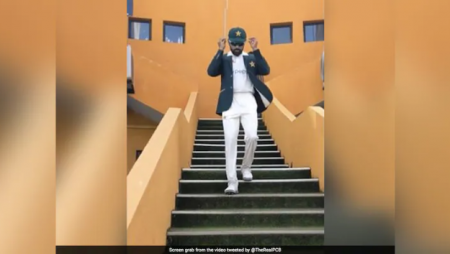 “Baggy Green” As Babar Azam Walks Out For Toss During PAK First1st Test Against SL. The first Test of the two-match series between Sri Lanka and Pakistan takes place at the Galle International Stadium. The toss was won by Dimuth Karunaratne, who chose to bat first.

On Saturday, the first Test match between Sri Lanka and Pakistan began at the Galle International Stadium. Dimuth Karunaratne, Sri Lanka’s captain, won the toss and chose to bat first against the visitors. Soon after the toss, the Pakistan Cricket Team’s official Twitter account share a video of Babar Azam walking into the stadium in “baggy green.” Babar seen wearing his sunglasses as he walk down the stadium’s stairs to the ground.

Also Visit: A young girl in the crowd is struck by Rohit Sharma’s shot.

“Baggy Green” As Babar Azam Walks Out For Toss

Some fans appear to have applauded for Babar as he entered the stadium. Meanwhile, Pakistan Cricket shared the video with the caption: “Baggy green is on. The green blazer is on. Test cricket feels. #SLvPAK #BackTheBoysInGreen.”

It’s worth noting that Pakistan captain Babar Azam was recently praise for his heartfelt gesture toward India batter Virat Kohli. After Kohli bowl out for a 25-ball 16 in India’s second ODI against England, Babar consoled him by giving him the strength to fight his slump with the bat.

“This, too, will pass. Maintain your fortitude. #ViratKohli, “said Babar in a social media post that included a photo of the duo standing together, with Kohli’s right hand on the Pakistan captain’s right shoulder.

Babar’s Twitter post has received over 240k likes and 44k retweets. From fans to former international cricketers, everyone praised Babar for going above and beyond to inspire Kohli.

On the other hand, Kohli’s current tour to England has been a flop, as he continues to struggle with his batting form. While Kohli scored 11 and 20 in the rescheduled fifth and final Test against England, he also scored 1 and 11 in the two T20Is before scoring 16 in the second ODI.