Aus vs Pak: Pat Cummins uses a hammer to try to level an uneven area of the Karachi pitch. 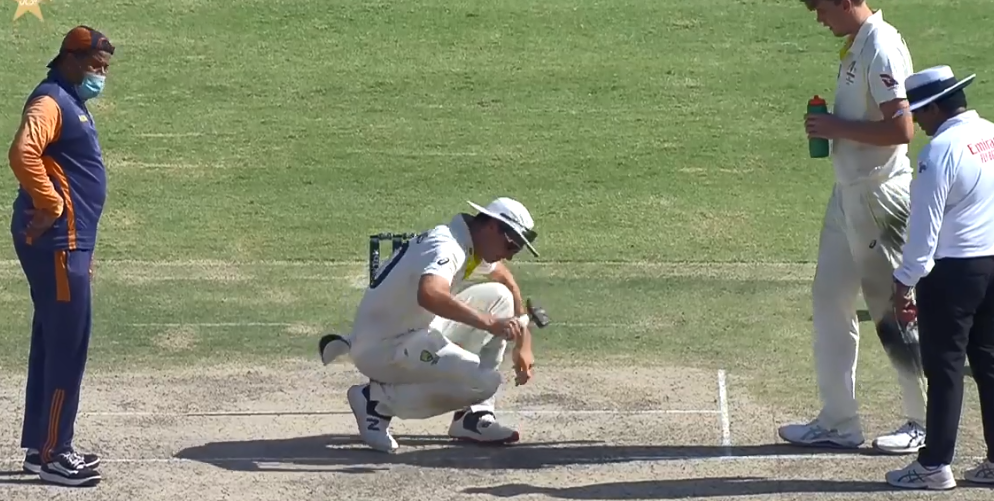 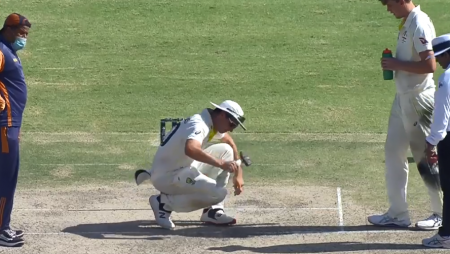 Aus vs Pak: Pat Cummins uses a hammer to try to level an uneven area of the Karachi pitch. Pat Cummins seen pounding the turf with a hammer in Karachi. Trying to make the landing area more comfortable for Cameron Green.

Australia is currently playing Pakistan in the ongoing second Test. On Day 4, Australia captain Pat Cummins drew attention as he attempted to repair the Karachi pitch. Cameron Green had the ball in hand when the incident occurred in the 53rd over of the innings. Cummins step up with a hammer in hand to fix the uneven part of the bowler’s landing area on the pitch. The ground staff were taken aback by how naturally the task came to the Australia Test captain. Cummins Moreover, pounded the turf with his hammer, attempting to make Green’s landing area more comfortable.

Pat Cummins uses a hammer to an uneven area of the Karachi pitch.

PAK has set a target of 506 in the ongoing second Test at the National Stadium in Karachi. At stumps on Day 4, Babar Azam and Abdullah Shafique were unbeaten on 102 and 71 respectively, with the hosts scoring 192/2. Furthermore, PAK needs 314 more runs to win the Test and take a 1-0 lead in the three-match series.

On Day 4, Australia’s Nathan Lyon and Cameron Green each took one wicket.

The first Test between these two countries end with a draw, and the Rawalpindi pitch was heavily criticized because the game was heavily skewed in favor of the batters. The pitch was also rate as ‘below average’ by the ICC, and the venue received one demerit point.

Ramiz Raja, the chairman of the Pakistan Cricket Board, has also commented on the pitch, stating that a draw is never good for the game. Pat Cummins also stated that Pakistan wanted to keep Australia’s pacers out of the game, which is why such a flat track was prepared.