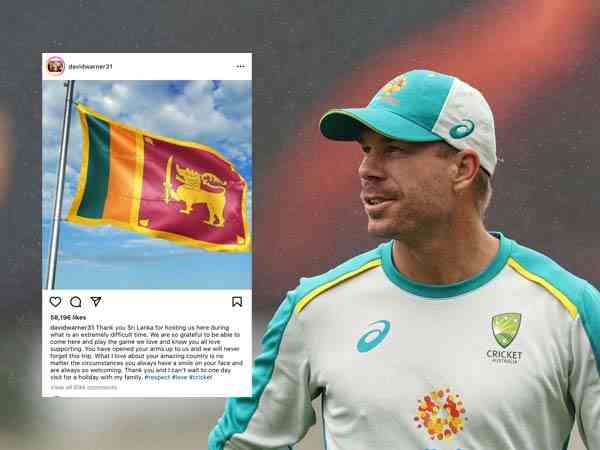 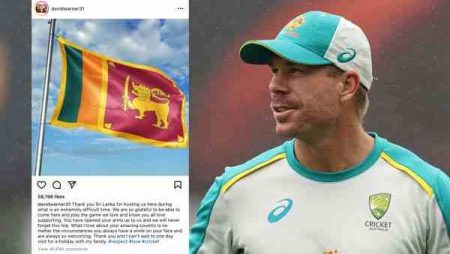 Sri Lanka’s memorable victory over Australia in the second Test in Galle, which tied the series 1-1, marked the end of the visitors’ tour of the country during a national crisis. While Australia won the T20I series 2-1, the home team gave their fans something to cheer about by winning the ODI series 3-2. The Test series then ended in a tie after Sri Lanka recovered from a poor batting performance in the first match to defeat Australia by an innings.

On Monday, Australia’s star batter David Warner took to Instagram to write an emotional message for Sri Lankan fans, thanking them for hosting Australia “during what is an extremely difficult time.”

Also Visit: Jonny Bairstow has been named the ICC Men’s Player of the Month for the month of June 2022.

“Thank you Sri Lanka for hosting us here during what is an extremely difficult time. We are so grateful to be able to come here and play the game we love and know you all love supporting,” Warner wrote in his post.

“You have opened your arms up to us and we will never forget this trip,” he went on to add.

“What I love about your amazing country is no matter the circumstances you always have a smile on your face and are always so welcoming,” Warner wrote.

“Thank you and I can’t wait to one day visit for a holiday with my family,” he signed off.

Sri Lanka, a country of 22 million people, is experiencing unprecedented economic turmoil, the worst in seven decades, with millions struggling to buy food, medicine, fuel, and other necessities.

Tens of thousands of people have taken to the streets in recent months to demand that the country’s leaders resign over allegations of economic mismanagement.

Also Read: Sunil Gavaskar defends Virat Kohli, saying, “No one talks when Rohit Sharma bats, and others don’t get runs.”