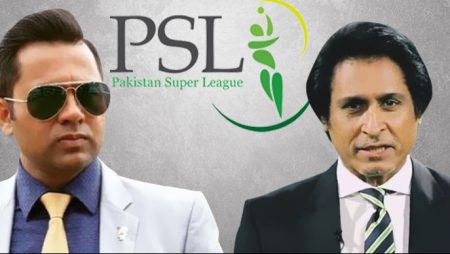 Aakash Chopra has reacted to PCB chief Ramiz Raja’s idea of introducing an auction model for the Pakistan Super League, claiming that no player will ever command a price tag of Rs 16 crore. Previously, Ramiz Raja state that if the PSL is run on an auction model, it will be possible to determine who prefers to play in the Indian Premier League over the PSL.

“Even if auctions were use instead of drafts, you would not see a player playing for 16 crores in the PSL. It cannot happen; market dynamics will not allow it to happen; it is as simple as that “According to Aakash Chopra’s YouTube channel.

“The story begins with the broadcaster deciding how much money he is willing to spend,” he added.

Also Read: The IPL media rights could be released soon, with the price expected to be double that of the previous cycle.

“Who Goes To IPL Over PSL”

Chopra also cited Chris Morris, previously selected by the Rajasthan Royals for Rs 16 crore. According to the former India batter, no other league in the world can compete with the economics that take place in the IPL.

“To be honest, Chris Morris’ one ball when he last play is more expensive than the players’ salaries in other leagues. Is it even possible to compete or compare yourself to the IPL, whether it’s the PSL, BBL, The Hundred, or the CPL? Is this a slightly erroneous assessment? “He pondered.

“The price is determine by how much money you receive from the rights; the league value base on the rights sold; and there is a total purse for which you play. All of these are interconnected; they are not distinct. If someone sees them separately, he will defeat “He went on to say.

Ramiz Raja had previously stated that he wished to transition the PSL from a draft system to an auction model. He went on to say that an auction model and a larger purse in the PSL could put it in the same league as the IPL.

The IPL 2022 season will begin on March 26, with the first match between CSK and KKR.