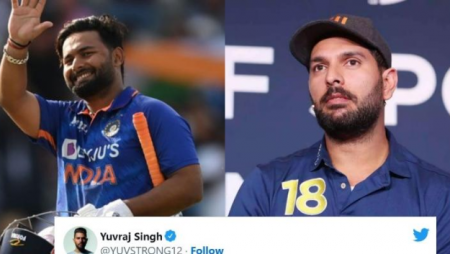 Rishabh Pant was the Indian cricket team’s hero on Sunday, scoring his first ODI century against England in Manchester. Pant’s unbeaten 125 off 113 balls aided India’s comeback from 72/4 to chase a 260-run target in 42.1 overs. Pant and Hardik Pandya (71, 55 balls) put on a 133-run fifth-wicket stand to help India win by five wickets and clinch the series 2-1. Pant had been struggling with poor form in white-ball formats, but stepped up when it counted.

Following the great innings, former Indian cricket team player Yuvraj Singh tweeted that he may have had a lengthy conversation with wicketkeeper-batter Pant.

“Looks like the 45 minute conversation made sense!! Well played @RishabhPant17 that’s how you pace your ininings @hardikpandya7 great to watch #indiavseng,” Yuvraj tweet.

Pant, who was named Man-of-the-Match, expressed hope that he would remember his first ODI century for the rest of his life. “I’m hoping I remember (this knock) for the rest of my life. When I was batting, I concentrated on one ball at a time. When your team is under pressure and you bat like that… that’s something I want to do “Pant, who was 25 for two, stated.

During a post-match press conference, Hardik spoke at length about his partnership with Pant and what he told the left-handed batter during their 133-run stand.

“I was just saying the same thing over and over: it was critical that we not take any risks. We can score runs with the kind of talent Rishabh and I have without taking any risks. It was all about not losing any wickets; there was only one way for England to recover, and that was if we lost wickets in a row. I was doing the same thing over and over again in order to form a partnership and bring the match to a close “Hardik stated.

“I told Rishabh that you should finish the game first and then relax. He got a little stuck when he came in, but he eventually started playing his shots. And everyone knows that when Rishabh begins to play his shots, you just sit back and let him do his thing “He continued.

Also Read: Hardik Pandya Shares Video Of His Journey “Through The Ups And Downs” From Struggling To Walk to Becoming India Captain