2nd T20I: Obed McCoy dedicates his player of the match award to his sick mother. 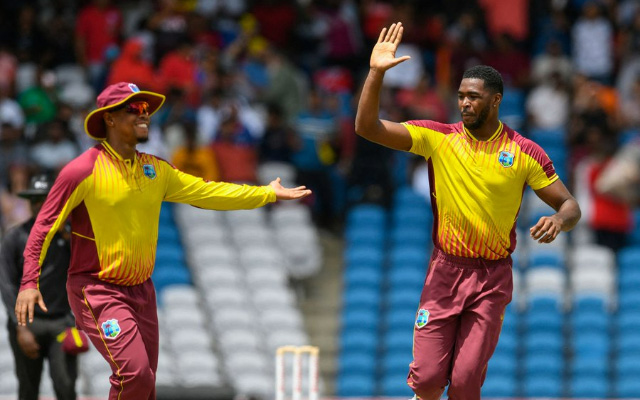 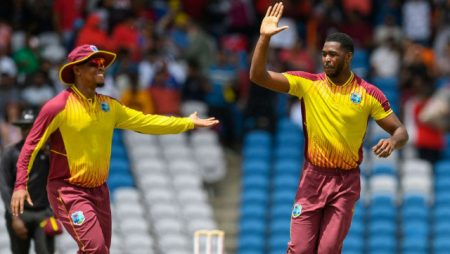 2nd T20I: Obed McCoy dedicates his player of the match award to his sick mother. Obed McCoy finished his four-over spell in the second T20I with 6 for 17.

West Indies won the second Twenty20 International against India, tying the series at 1-1 at Warner Park in St. Kitts. Obed McCoy was named player of the match for his brilliant bowling performance, which began with him picking up Rohit Sharma on the first ball of the game. The left-arm seamer went on to take six wickets in the game, recording the best figures ever by a West Indian bowler in T20 internationals with 6 for 17 in four overs.

McCoy, a T20 specialist, made his T20I debut in 2019 and has since played 18 games. Picking up 29 wickets at an average of 15.48. Moreover, The 25-year-old has been bowling the tough overs for the West Indies team, and a fifer against a quality Indian batting lineup will boost his confidence. McCoy also gave an emotional speech after being name player of the match.

Also Visit: I recall telling Rishabh Pant that he is an exceptional gymnast: Shankar Basu

My mother has inspired me to improve as a player: Obed McCoy

McCoy stated that he wishes to dedicate the special occasion to his sick mother, who has always inspired him to improve as a player. He revealed his powerplay strategy of going for wickets and admitted that he erred in the previous game due to overthinking. He was overjoy with the experience and challenges that had recently emerged.

“This is for my mother.” She is ill, and she has inspired me to improve as a player. The batsmen were put under pressure by the first ball wicket. In the powerplay, I always look for wickets. I entered with an open mind. I was overthinking a little in the previous game. It’s a challenge for me, and I’m grateful for all of the experiences and challenges,” McCoy after the game.

The series is tied at 1-1 with three games remaining, with the third T20I between India and the West Indies taking place on August 2 at Warner Park in St. Kitts.